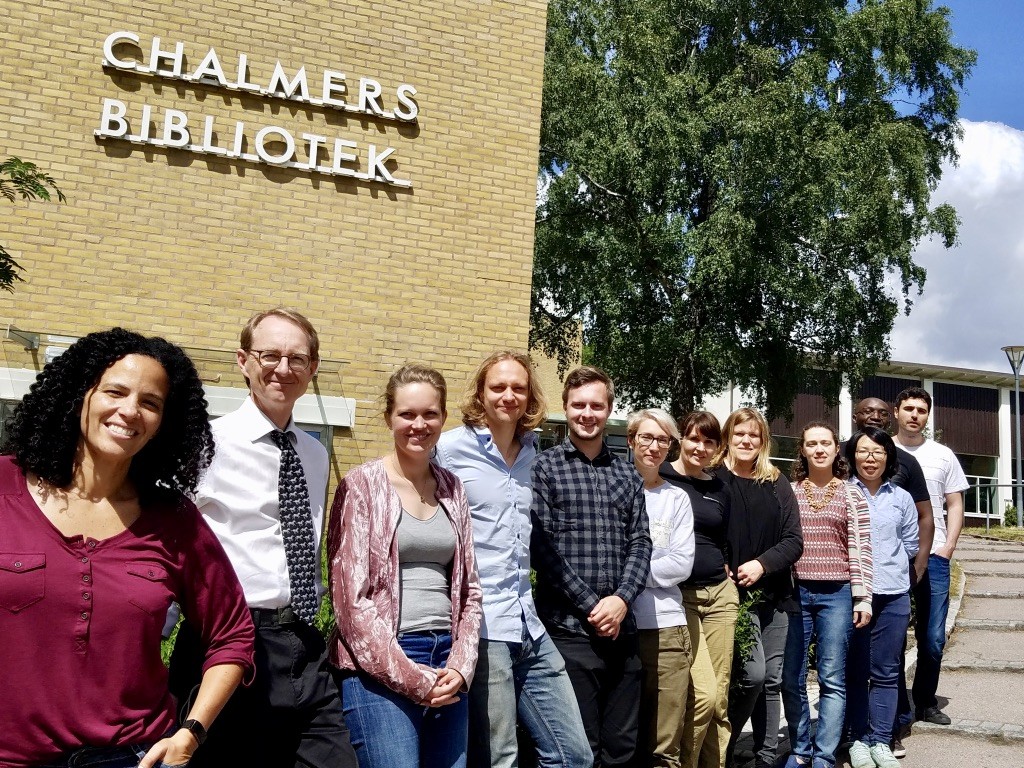 Teachers and PhD students at Chalmers participating in a workshop on how to make a science podcast.

What´s the science behind self driving cars, hospital entry architecture and faster computers? In this episode we meet eight PhD-students presenting five minutes stories about their research projects at Chalmers University of Technology. We also talk to Dr. Raychelle Burks from St. Edwards University in Texas and Professor Lars Öhrström from Chalmers, about how they work to get science out to the society. Come along with RadioScience to a workshop on science communication, a warm and sunny day in June. We went to Gothenburg to give tips and tricks on recording and editing a podcast. In return we got eight really interesting short stories within the field of technology.

In addition, Raychelle Burks reads the post ”Because she didn’t die” from her blog thirty-seven and Lars Öhrström gives us a taste from his book ”The rhubarb connection – the everyday world of metal ions” – to be published in December.

This episode was produced in collaboration with teachers and students at the workshop on popular science communication at Chalmers University of Technology, Gothenburg, Sweden. Drugs that stop bacteria from talking might be new, powerful antibiotics – a much needed weapon in our never-ending struggle against bacterial infections. On the other hand, drugs that make bacteria chat more could boost the production of biofuels and other industrial goods that bacteria make for us.

In 1990 a young Bonnie Bassler, mesmerized by glow-in-the-dark bacteria that could talk to their peers to coordinate light production, wondered whether other bacteria could talk too. The answer, she soon found out, was yes – including all the nasty bacteria that cause disease. Today, Bonnie Bassler is a professor in molecular biology at Princeton University and an authority in the field of bacterial communication.

Her findings, that all bacteria can talk, revolutionized the way we think of bacteria and opened the doors to important medical and industrial applications.

But the discovery of bacterial communication has given us much more than new drugs. It has shown us how bacteria live in the real world and forced us to reconsider our own human nature – if bacteria are talking, social beings too, how different are we from them after all?

Prick your ears up and follow RadioScience on an exciting tour of the bacterial world and its chatty multilingual inhabitants – after which, we promise, you will never call bacteria boring again! 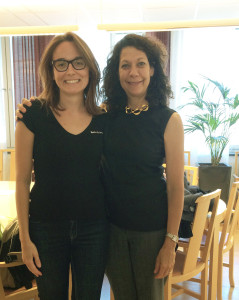 After the interview, Bonnie Bassler poses with our intern Federica Santoro.

Bonnie Bassler is an all-round communicator. Not only does she like to talk to bacteria, she is also passionate about sharing her research with the public. In a memorable TED Talk in 2009, she captivated her audience with the tale of the tiny glow-in-the-dark bacterium that changed microbiology forever. In this episode of RadioScience, she tells us why she loves to engage in science communication. And why everyone should take an interest in science – don’t miss it!

Psssst… Remember our previous episode, where we told you about reviving mammoths with the help of a technology called CRISPR? Well, CRISPR is another wonderful product of bacteria! It is the immune system bacteria use to defend themselves from their enemies, now converted into a powerful gene-editing tool. Bacteria are truly full of wonders…